So, if you’ve been following the blog you’ll have been anxiously awaiting September 25th when our Traverse Ale was supposed to be released.  Well, we’ve got great news for you!  We were over eager and jumped the gun…we released our Traverse Ale on Friday, September 12th so we could revel in it’s rich, full body, lively hops, and deep red color just a little longer!  Come on in and try this great seasonal ale that will only be with us for a short time.  And don’t forget to check out the Bellingham Traverse (the actual race the beer was brewed in honor of) happening on Saturday, September 27th.

The Great Canadian Beer Festival took place last weekend in Victoria, B.C.  So, we went to Canada and spent September 5th and 6th with over 45 craft beer brewers and about 700 participants who come from all over the world to enjoy samples of internationally acclaimed craft beer.  One fun-filled participant sent our brewery photos she took at the event and proclaimed our booth the winners of the “spirit award!” 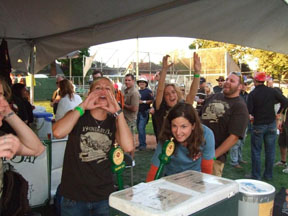 Yesterday, we were representin’ at the WABL (Washington Association of Beer Lovers) Oktoberfest in Seattle.  The event was held in the Pyramid Alehouse parking lot and was the 2nd Annual Oktoberfest presented by the Washington Beer Commission.  The festival was packed with heartily enthusiastic supporters of both beer and Oktoberfest culture.  There were the usual faves…like the chicken dance (check out the video below from yesterday’s beer lovers!) which has become an Oktoberfest tradition, men in Lederhosen, and even an accordion jam session.  =)

I came across a group of soldiers who were due to be shipped out to Afghanistan soon (details were not forthcoming as it would, apparently, be a breach of confidential troop movements…boy did I feel dumb for asking!) and were using their last days in the United States drinking as much locally made Washington craft beer as possible.  But, I think my favorite part of the event was the loose interpretation of the keg toss that is also tradition at Oktoberfest events.  In the interest of safety and the lack of coordination in the severely inebriated, this festival opted to toss full cans of Rainier Beer toward a keg (sawed in half) and surrounded by a bed of nails.  I missed the exact details of the competition, but basically, you got 2 points if your can made it into the keg, 1 point if you stuck the can onto the bed of nails (hopefully spraying the crowd in the process) and 5 points if you could slice your can in half by landing it directly on the edge of the sawed off keg. 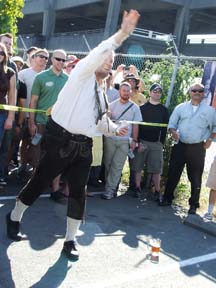 Check out our website for a slideshow of all the great pictures from the WABL Oktoberfest…and don’t miss this Washingon Beer Lovers Oktoberfest next year!