Last week we tried our very first Virtual Brewers Night.  We sent the beers and the schwag down to Alligator Soul in Everett and told everyone to show up with their smart phones in hand.  We didn’t really know what to expect, but we thought it would be a relatively fun adventure no matter how it turned out.

Over the last three years, we’ve had a lot of success with Boundary Bay Brewery on social networks.  We’ve built up our online community to over 12,000 members on Facebook and almost 3,000 on Twitter and are happy to say that it’s still growing every single day.  We’ve found fun, unique ways to interact with our online friends – from writing Haikus about Cabin Fever to recommending favorite BBAY beer and menu pairings.  We even ran a contest around Father’s Day where people wrote about which Boundary beer their Dad was the most like in hopes of winning a membership to the Washington Association of Beer Lovers.  It’s been a lot of fun and we’re always looking for new ways to connect with our social media community.  So, we decided to take the basic idea of a tweetup and turned it into a Brewers Night.

Here’s a little bit of what BrewSpeak blog had to say after attending our Virtual Brewers Night: “So, amid splendid food and drink, and with live music from “Stan is Love”, it was time to get down to some serious tweeting. The twitter feed was up on a tv screen, with both Alligator Soul and Boundary Bay actively participating, offering prizes for correct answers, and raffle tickets. If you want to see the tweets from the night, search for the hashtag #bbaygotsoul. You’ll find a fair few tweets from us as well. Pretty soon some of the more avid tweeters were gravitating towards each other, and before we knew where we were we were actually having real life, proper conversations! We had an excellent chat with Tim Gormley from www.beerblotter.com. The beer blotter guys have been blogging for about a year, and based on the conversation with Tim, and a look at their blog, I can heartily recommend it. We have a lot to learn from folks like Tim – a good guy with a love of great beer.  It was also fun to meet Tim Lorang from www.timlorang.com. Tim is a man of many talents, who among his many skills, counts himself as a social media integration specialist, with a background in both wine and beer. Who knew such people existed? All in all, despite the slightly odd premise, I’d count the evening as a success – with the evening made better for us by being big winners at the raffle. So Cheers to both Boundary Bay and Alligator Soul for an innovative event that will hopefully be repeated.”

On our end of things, it was a little bit odd…and definitely jealousy inducing!  It’s rough to be holed up alone in your office at 8pm on a Thursday night interacting virtually with people drinking your favorite beer on earth and talking about it…while you get none (at least ’till you’re off the clock!).  As the night got rolling, people posted pics of themselves at the brewers night…standing at the bar with a beer in one hand and their phone in the other.  Even the owner of Alligator Soul posted a pic of his “command central” – his laptop loaded up with Tweetdeck to track all the happenings of the night.  My pic was less fun…just me in my office.  But it was fun to get to “see” what all these Social Media users looked like in real life. It was a bit like dodgeball as we kicked off the trivia via Twitter and awarded tickets for correct answers.  It was a challenge to track all the people interacting with us and Alligator Soul throughout the night, but with the help of Hootsuite, it was definitely doable!  We were impressed with how the night went, overall, and would absolutely do it again.

Thank you to all who joined us for our very first Virtual Brewers Night. We really appreciate you being willing to go on this social media adventure with us.  Till next time…Cheers!

We are partnering up with Alligator Soul in Everett for a Virtual Brewers Night on Thursday, November 18th from 6-9 pm.  Now, before you get all hot and bothered…we’re not asking you to taste VIRTUAL beers.  We’d never deprive you of the joy of our hand crafted beverages!  We do, however, want you to come to Alligator Soul and communicate virtually (meaning via social networks) about all the happenings…while it’s actually happening!  There’s going to be live music, specials, prizes, and more!

Alligator Soul has been proudly serving its N’awlins-style cuisine in Everett, Washington since 1995. This place is known for good grub and great people with the goal of giving folks a taste of true Southern hospitality. It should be no surprise, then, that it is where people flock for great Cajun and Creole food in the Northwest.  Lucky for us, you can always find Boundary Bay Brewery beers on tap among their 18 taps of mostly local and regional beers!

We, along with Alligator Soul, are big believers in social media for our businesses, but we also think community is really, really important.  So, during a Virtual Brewers Night, we get to combine the best of both worlds!  Anyone is welcome at this event, but we’re particularly interested in those who tweet and are already craft beer fans.  In preparation for the big event, don’t forget to “follow” us and Alligator Soul on Twitter: @BoundaryBay and @Alligator_Soul.  Following us on Twitter will also be how you get in on the Virtual action during the Brewers Night!

Here’s how it’s going to work:  make sure you BRING you smartphone with you to this Brewers Night and use the #tag we’ve set up for the event, which is #bbaygotsoul – especially because everyone who tweets about the event (while AT the event) and uses the #tag will be entered into a drawing for some sweet, sweet schwag!  Also, be sure to look for tweets before the event for a coupon for some awesome FREE cajun food, then bring in your smartphone and show them the coupon from your phone to score free food that night.  During the event, the Boundary Bay Twitter account will be fully staffed and ready to answer all your questions about our beer, our business…or whatever!  So tweet your questions to us during the event and keep an eye on the live Twitter feed up on the tv at Alligator Soul for our answers to your inquiries.  There’ll be plenty of other fun too like live music and trivia questions that just might net you $1 off your beer if you get the right answer!

So, bring your smartphones and show up at Alligator Soul on November 18th.  Prepare for great beer, tasty cajun food, live music, social media and more!  See you there. 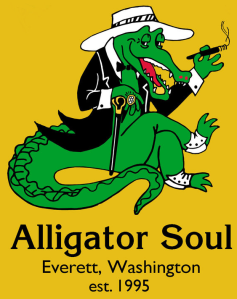 We know that you can’t ALWAYS drive up here to Bellingham when you’re in the mood for a Boundary Bay Brewery beer, so we’re highlighting other places where you can get a pint of BBAY and check out another cool, local business at the same time!

Alligator Soul has been proudly serving its N’awlins-style cuisine in Everett, Washington since 1995. Founded by the late Chef Hillary ‘Hilbo’ Craig, Alligator Soul is known for good grub and great people with the goal of giving folks a taste of true Southern hospitality. Owned by Rob and Sharyl Siegel, Alligator Soul continues the tradition of serving great Cajun and Creole food in the Northwest.  They also have Boundary Bay Brewery beers on tap among their 18 taps of mostly local and regional beers!

On the lunch menu, you’ll find dishes like Fried Green Tomato Salad, Turtle Soup with Sherry, Gumbo, Po’Boy Sandwiches and Red Beans ‘n Rice.  Or, for dinner, you can indulge in classic Southern dishes like Crawfish ‘n Grits, Beignets, Ham Hocks, Louisiana Alligator with roasted red pepper puree and chipotle dipping sauce, or Creole Onion Soup.  Not to mention will-power busting desserts like Sweet Potato Pecan Pie , Turtle Brownies and Bread Pudding with Bourbon Sauce.  They’ve got a kids menu too, for those 10 years old and under!  Check out their full menu online.

crawfish in the making...

You’ll find live music Thursday through Sunday every week, and with weekly specials like Endless Jambalaya on Mondays, Steak Night every Tuesday, Fish n’ Hushpuppies on Wednesdays, and BBQ n’ Blues every Thursday, you just can’t go wrong!  They have a happy hour every day from 3-6pm and on Fridays and Saturdays, they do a second happy hour from 9pm to closing time.  They are also available to cater your event!

Alligator Soul is located at 3121 Broadway in Everett, WA.  You can also connect with them online through Facebook and Twitter.