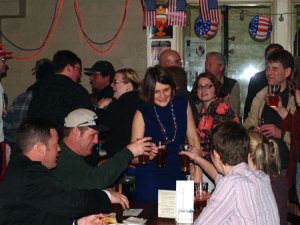 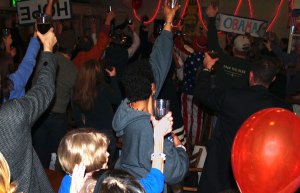 Fun was had by all at the Boundary Bay Brewery Inauguration Party…as you can see from the photos!  We were packed and housed a great crowd of people all eager to celebrate this historic moment in American politics.  We filmed a live broadcast for ABC who showed it on air as well as projected the footage at the official Neighborhood Ball in Washington D.C. that the Obama family was attending.  We got lots of great shots of our lively crowd, plus (as you’ll see above) a photo of Aaron Jacob Smith, our head brewer, and Mike Zielfder, one of our salesmen, showing off their patriotic zeal!  To the left, in the middle, is a great shot of our General Manager, Janet Lightner, toasting the new change taking place.  Our Inauguration Party was pulling double duty and raising money for the Bellingham Food Bank at the same time.  Admission to our little shindig was $4.40 (in honor of our 44th president!) or two items of non-perishable food donated to our local food bank.  We here at Boundary Bay Brewery feel lucky to have been part of the Inauguration Day events on a national scale, to get a chance to raise money for our community,  and to celebrate the inauguration of Barak Obama with such wonderful people in our community.

We here at Boundary Bay Brewery just found out that our Inauguration event has been chosen to be part of the live broadcast on ABC that starts at 5 pm (PST).  Through interactive technology and a live broadcast on ABC, the Neighborhood Ball will be linked with Boundary Bay Brewery and other parties across the country, making for a truly special night that all Americans can take part in.

Details:
Join us on January 20th, 2009.  Boundary Bay Brewery is hosting an Inauguration Party – Recession Style.  The event will benefit the Bellingham Food Bank and will begin at 11 am with televised coverage of the Inauguration events in Washington DC and will culminate in jazz brought to us by the Blues Union Band starting at 8 pm.  Cost is $4.40 per person or a donation of two non-perishable items for the Bellingham Food Bank.  This is a great chance to not only give back to our community, but to also be part of televised history.  See our earlier post on the party for more complete details!