This year, the Ski to Sea Race is celebrating 100 years of racing in this community and they’ve asked us to brew a special Boundary Bay Brewery beer to commemorate this exciting anniversary.  We were thrilled to take on the challenge and created a dry hopped ESB that we’re calling the Ski to Sea ESB.  It is an English style pale ale, copper in color, emphasizing the subtle blend of imported and domestic malts. The addition of dry hops adds a delightful hoppy aroma and a slight floral, grassy flavor. 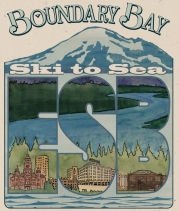 What is the history of the Ski to Sea race? In 1911, a few crazy Bellingham and Whatcom County locals ran to the summit of Mt. Baker and back down to see who was the fastest in the first Mt. Baker Marathon, America’s original adventure race.  Today, that spirit lives on in the Ski to Sea Race, a 7 sport relay over 100 mile course. You can read more about the rich history of this race here.

We’ll be bottling the beer here at the brewery on May 4th or May 5th and it will be available to the public in 22 oz. bottles and on tap at Boundary Bay Brewery by May 6th.  We’ll also have t-shirts and posters with the Ski to Sea ESB label design for sale here at the brewery – coming soon!

Ski to Sea Weekend is, arguably, the kick off to summer here in Bellingham and the fun this year will be taking place May 22nd-24th!

The annual Ski to Sea Race from Mt. Baker to Bellingham Bay can be traced back to the Mt. Baker Marathon held from 1911 to 1913.  The idea for the marathon was developed by the Mt. Baker Club, a group of conservation minded citizens that were attempting to have the North Cascades area designated as part of the National Park System. The foot race to the top of Mt. Baker was a publicity stunt aimed at focusing the government’s attentions on the region. In 1973, the Mt. Baker Marathon was recreated and called the Ski to Sea Race. The Race, now a relay, was designed to showcase the recreational opportunities in Whatcom County. The Race has evolved into the “Grand Daddy” of all races, attracting participants from all over the world. In 2005, the Ski to Sea Race was featured nationally on the “Fox Sports Northwest” network, reaching 3.2 million households.

Interestingly, this race has also become a long weekend packed with celebrations all over town for racers and non-racers alike. The actual race is on Sunday, May 24th, but like the training the racers undergo, those of us on the celebrating side of things like to get a good warm up in too.  And that’s where Boundary Bay Brewery comes in to help!

We’re kicking off the fesivities on Wednesday, May 20th when we officially open our Beer Garden season with the very first Yogoman’s Wild Rumpus of 2009!  DJ Jordan Rain has been gracing our garden for years now on Wednesday nights in the summer.  He spins reggae while adults and children alike enjoy the beer garden, the BBQ, and hula hooping in the sunshine.  The event is all ages until 10 pm and kids get in free ($3 cover for everybody else)!

Then, on Thursday, we’ll have our Happy Hour BBQ down in the Beer Garden from 4-6 pm where you can grab pints for $1 less than usual and score brats, burgers, and/or bocca burgers (all with fries!) for $4.  What a steal!  Plus, every Thursday during our Happy Hour, we tap a different type of Cask Ale for your drinking pleasure and we have Robert Blake on hand to bring music to the Beer Garden and make your Happy Hour even happier.

Friday night is when all the fun around town this weekend gets kicked into high gear!  On Friday, Jordan Rain returns to the Boundary Bay Brewery, but this time he’s leaving the records at home and bringing his band instead.  At 9 pm, Yogoman’s Burning Band will take the stage in our Beer Garden and get everyone dancing with their fun, slightly kooky and super lively music replete with horns, percussion, and lots of guitar.  This is, seriously, not a performance that you want to miss! (check out the video below for a sneek peak.)

Acorn Project, another favorite Bellingham band, keeps the party going strong on Saturday night down in the Boundary Bay Beer Garden (9pm/$8 cover).  As a six-piece ensemble featuring saxophone, guitar, slide, keyboards, bass, drums, and percussion, Acorn Project produces an irresistibly unique sound and seemed to have perfected funk-infused progressive rock. Formed in 2004, this Bellingham, WA based sextet is rapidly building a devoted fan-base around the country.  Bring your dancin’ shoes for this show!

Sunday morning, May 24th, is the day of the actual race and, while we’ll have a women’s team competing in Ski to Sea, we’re also fitting in just a little more celebrating before the festivities end.  Ryder Cunningham will be playing down in our Beer Garden from 6-8 pm and then the Atlantics will play at 8 pm to wrap up our long weekend.  We’re certainly excited about Ski to Sea weekend…and we’re sure you are too.  Come celebrate Memorial Day weekend with us here at Boundary Bay Brewery!