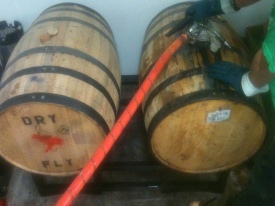 Our Scotch Ale is a beloved favorite of many.  We think it’s great as is, but we figured everybody needs a change every once in awhile, right?  So, we teamed up with Dry Fly Distillery in Spokane to create a small batch of  Barrel Aged Scotch Ale.  Dry Fly loaned us a couple of whiskey barrels and we’ve been aging our Scotch Ale in them.  The result is a smooth, strong beer that is complex with a lingering hop finish (original gravity 1.064).

The majority of this barrel aged beer will be going back to Spokane, but you’ll get a few chances to taste this rare brew on this side of the mountains.  We’ll have it on tap, here at Boundary Bay Brewery, on Monday, Dec 5th. This batch is limited so don’t miss out.  Come early, as we’ll be tapping the pony keg around 11am…and my guess is this stuff isn’t gonna stick around for long! If you can’t make it to our brewpub on the 5th, you can also get a taste at the 2011 Winter Beer Fest and at Brouwer’s Cafe Big Wood Event. 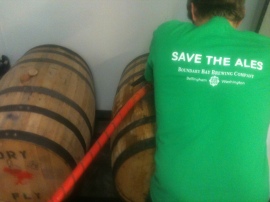 The 2011 Winter Beer Fest is held in Seattle on December 2nd and 3rd.  Put on by The Washington Beer Commission, this festival will showcase a variety of winter seasonals from 30 Washington breweries. (Get tickets and more info at www.washingtonbeer.com/winter-fest/.) We’ll be pouring 2008 Cabin Fever, Oak Aged Oatmeal Stout and our BRAND NEW, Barrel Aged Scotch Ale.

And your last chance, here on the West side, to taste our barrel aged Scotch Ale is at Brouwer’s Cafe Big Wood Event, Thurs, Dec 8th, starting at 11am. Don’t miss this unique event featuring 40 wood aged beers on tap, including our Barrel Aged Scotch Ale!