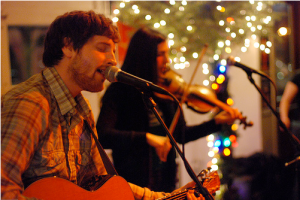 Last week, at the Boundary Bay Brewery Late Show, the Ian McFeron Band and Hoss got the crowd pumped up and shakin’ their rumps!  See all the photos on the flickr page for our Late Show photographer, Paul Israel.  Every Friday night, we feature the best of local and regional music at our Late Show which happens at 10:30 pm.  This Friday, January 16th, The Sugar High Mustangs from good ole’ Bellingham and March of the Black Queen from Missoula, Montana are kickin’ off the weekend in style.  For the latest updates on all our upcoming shows, check out the Boundary Bay Brewery Myspace page!  (And you do know you can find us on Twitter, right?!?).  Come hang out with us on Friday and grab a Cabin Fever while it’s still on tap.  What better wayy to shine a little light on those winter blues and break your hibernation than by hitting up The Late Show this Friday at Boundary Bay.

The Love Lights and Mt. St. Helen’s Vietnam Band take the stage Friday Night at Boundary Bay Brewery in our next installment of The Late Show.  We started the Late Show in response to so many local music venues being shut down over the last several years.  Increasingly, there have been problems with noise ordinances and the clash between the downtown area being seen as a cultural hub or an ever more gentrified place to live.  All this debate has even prompted the formation of the Bellingham Downtown Alliance of Music and Nightlife or B’Damn for short.  The organization tries to facilitate communication between music performers, music venues, and Bellingham’s government and law enforcement.  However, regardless of the steps being taken to smooth relations, the fact remains that there are fewer places than ever to hear live music in downtown Bellingham.  Boundary’s response to this situation was to formulate our Friday Night Late Show.  The brewery has a long history of live music, but in years past, it’s more often than not been of the jazz in the evening, or reggae in the garden with hula hoops variety.  Now, with The Late Show, we have a chance to up the ante and bring in louder bands, bigger rock shows.  Doors open at 10 for our late shows, giving the innocent Imperial IPA drinker or yam alechelada eater time to enjoy the vices in relative peace before all the hoopla starts!  This Friday, The Love Lights will bring their unique fusion of Indie pop music and 3 part horn section.  They liken their sound to The Beatles at Muscle Shoals Studios and Curtis Mayfield at Hittsville, USA.  Mt St Helens Vietnam Band hails from Seattle and were featured in Spin this year in the Buzzcatcher section.  Spin described their music as “…ingeniously whipsawing between tense indie raving and harmony-rich pastoralia.”